Adult coloring has become a huge, blossoming industry.  In some ways it reminds me of when knitting exploded a few years back, suddenly this age-old art and craft was reaching more people and because of this, gaining new books and techniques and available options.  I am fully entrenched in the adult coloring bandwagon, however I didn’t just jump on.

I never really stopped coloring, ever since I was a kid.  When I was in high school I used to draw portraits for friends off of photographs to make some spare cash, and sold some hand-painted gifts to a local baby boutique.  One of my degrees is in Creative Arts, meaning I got to go to school and paint and color all day, and even after Yannick and I met I drew and colored a story book about us and our friends and had it copied and bound and I gave a copy to each couple for Christmas that year.  Drawing, coloring and painting has always been an ongoing hobby of mine though as I took on new ones (crochet, knitting, cross stitch, weaving, cakes) it fell by the wayside, becoming something I’d only pick back up when there was a need, like drawing personalized name signs for baby gifts, or painting huge murals for seasonal window displays at work.

Until 2013, but this part of the story starts the following year.

In the Spring of 2014 I had a health scare that put me in an odd place, craft-wise.  I didn’t have the energy to pay attention to anything that required my focus, like knitting something with a chart or shaping, for example, but I equally didn’t have the capacity to work on anything that didn’t require some level of concentration, as otherwise my mind would wander and think negative, scary thoughts.

I wound up teaching myself to Zentangle.  The combination of being able to doodle and zone out mixed with the zen-like aspect of carefully placing small, deliberate lines was too perfect to pass up, and I scoured every blog post and Pinterest board out there.  The creators of Zentangle attempt to make the process proprietary by setting certain ‘regulations’ on their advocated method, but I was able to glean enough from watching videos and doing a lot of reading.  While most of the ‘official’ Tangles were difficult to find posted (a remarkable feat, in this era) I did collect every other, user-generated tangle into a bunch of alphabetical Evernote files, and slowly began to practice in my spare time, or whenever I needed a little break from life.  While I did invest in a few Micron pens I didn’t buy any Zentangle Tiles (the small square papers you draw on), preferring instead to cut index cards into the required size and rounded the edges with a scrapbook punch.

Note: for those unfamiliar with Zentangle, it’s a drawing process where you prepare your paper and then fill in the sections with established patterns (called Tangles) that typically look rather impressive or difficult once completed, but are actually comprised of easy, repetitive steps.  The inked tangles are then pencil-shaded to provide depth and color variance in the image.  There are certified Zentangle instructors and people often create their own tangles, naming them and posting the step-outs (the step-by-step breakdowns) so others can find/use them.

When people use the ‘tangles’ in creative ways other than the specific method-based tiles, the results are called ZIAs- Zentangle Inspired Art.  I was inspired to attempt one such on my own, in honor of Jakob’s 7th birthday.  I lightly sketched his name, the background cake and the foreground ‘7’ in pencil and then filled in the different sections with different patterns.  Once I was done I shaded the whole thing with a pencil, blending out some with a tortillon (blending stump)

Somewhere in the beginning of the summer I decided I enjoyed the process enough to commit to purchasing a few Zentangle books, deciding I’d teach myself the ‘proper’ way to do things.  I had a trip coming up that would give me a lot of travel time and I figured the tiles were small enough that I could finish a few along my journey, but they’d also be easy to pick up and put down if I had to.  I packed a small drawing travel kit with some blank tiles and pen, pencil and tortillon, and worked on the first few days here and there. 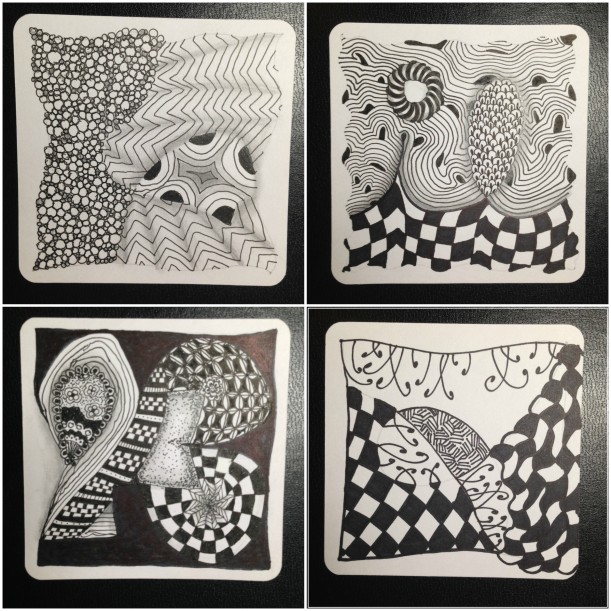 And then life happened, and I stopped Zentangling.  Other projects took precedence and my pens and books got relegated to the junk pile that was my office at the time.

This past October I was inspired to start again.

I got a larger sketchpad, my Microns and the One Zentangle A Day book worked through days 1 and 2… 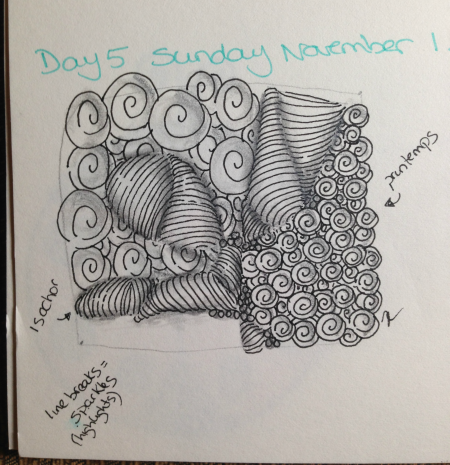 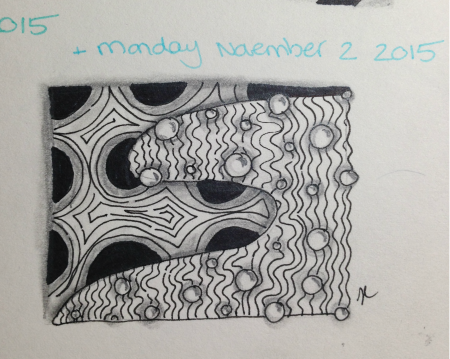 I also began a new ZIA, this time inspired by a late-season ladybug I found in my bedroom.

Unfortunately, around that time other projects began requiring my attention.  The later months of the year are when I work on teacher gifts, and have a bunch of cake events come up, and some other projects with deadlines, and once again the addictive flow of lines had to be put aside.  I also began to do more actual coloring again (more on that in the next post), which led to a brand new (old) hobby taking over my life.

I do intend to continue the book.  I also hope to finish my compilation of non-official tangles, as there are quite a few I find incredibly soothing to draw and really like the look of.  My goal with Zentangle is to get to a place where I no longer have to look up the steps, but can have a large number committed to mental muscle memory, so when I want to zone out and work on one before bed it won’t require the effort of looking up the steps for each and every tangle.