For those of you who follow me on Facebook, Instagram or Twitter, this is old news already, but it occurred to me yesterday that I’d never posted about it here.  Back in November, I dyed my hair… PINK!  (Ok, technically magenta, but it looks pink in most light).

Anyone who’s followed me for a loooong time might remember that I used to have long blonde hair, and when Henri was little I’d added a blue streak under one ear. 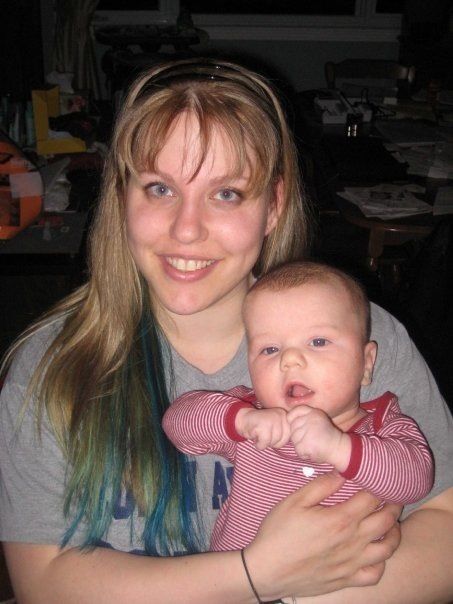 (Very few pics actually show it, this was the best I could find)

I’ve always missed having colored hair, and gaze longingly at all the purple, blue and other brightly (or pastel-y) colored tresses I see online.  Finally I decided to take the plunge again- I decided to dye the underneath of my hair blue.  Not the ends, ombre-style, but the underneath half of my hair, figuring that it would be cute but subtle, so I’d still look ‘professional’ enough for work or being a mom or whatever kind of grown up I’m supposed to be.

Then I told Yannick my plan.  Found him pics online… and he was not impressed.  He didn’t like the idea at all, and suggested dyeing my entire head.  “But… I don’t want to dye my whole head blue,” I protested, “It will fade to green and I don’t think that would suit me.”  “Then don’t go blue,” he said, “go red or pink or something.”  I decided to call his bluff and Googled crazy hair colors, opening up a ton of tabs to show him the ones I thought were pretty.

Surprisingly, we both liked magenta.  So… before I could change my mind and chicken out, I called my hairdresser the next morning and booked the appointment.

This was my last pic with brown hair before leaving for the appointment.  When I got there I looked through the color samples book.

I’d brought in a picture of the color I had in mind, and it looked closest to the color “orchid” above, however once there we decided to mix a little “magenta” in to brighten up the color a bit.  Now that I was actually there I decided to forgo any attempt at subtlety (I’d thought the orchid color might pass as brown in dim light) and just GO FOR IT! 😀 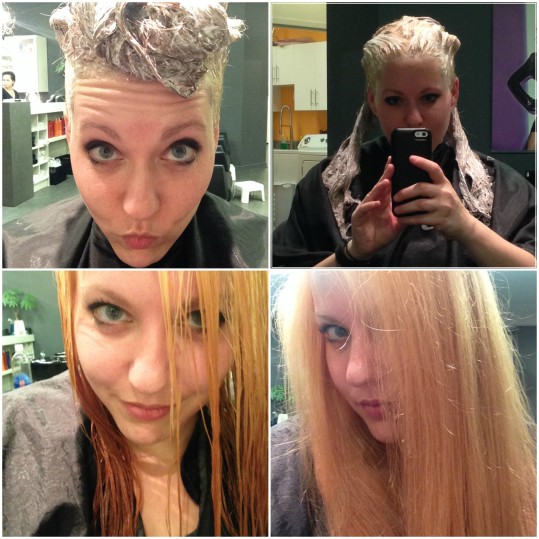 The first step to any of the ‘crazy’ colors is to lighten, so for the first time in at least 4 years I got to see how I’d look as a blonde again.  (Not a fan, tbh).  You can see the variation in my hair color, that’s because my hair has had brown dye in it for the last 4 years, as I’ve been dyeing it darker than my natural color… whatever that is.  (I’ve never dyed my eyebrows, so I’m guessing something like that).

In the top left image you can see the samples we played around with.  Kristin, my stylist extraordinaire, had taken an extension in a similar color to my now-blonde hair and dyed it with the orchid, the magenta, and a mix of the two.  The color we both liked best was the mix, and so that is what we did.  I got my first glimpses of how my hair would look as the color sat on my scalp.  No turning back now!

And here’s the final result, the first 3 pics taken at the salon, and the 4th in my front hall as soon as I’d gotten home.  Verdict?  I F’ING LOVE IT!!!

One thing that amazes me is how different it looks in different lighting.  These aren’t the best pics to show it, but contrary to what it would appear in this post I don’t run around taking selfies of myself all day hahahahaha.  Sometimes it appears pink, other times an almost neon purple, and in dim lighting it can go raspberry.

I’ve since gone back to have the color touched up, because sadly these kinds of colors fade pretty quickly.  I’ve managed to keep it vibrant by following the tricks I’ve read up about – washing with cold water, minimal shampooing, using a cuticle sealant, avoiding heat styling… but because the roots didn’t have brown dye they remained more vibrant a purple color, and the ends faded to a kind of red-wine shade, so I went back to have the opposite colors put on each section so they would match better.  Eventually as my hair grows out and I trim off the previously-brown ends it will be easier to have a more even color everywhere. 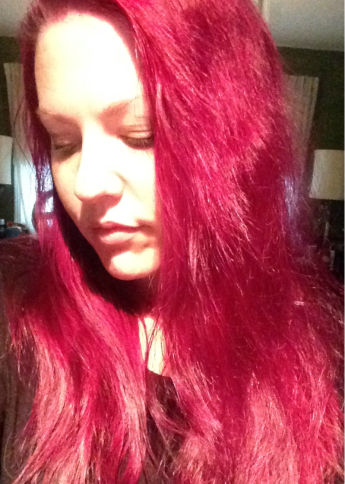 This is the result of the last color- even color from root to end.  In my bedroom it takes on this reddish hue, almost veering towards The Little Mermaid.  At Hebrew school pick up last week I was told it was almost glowing purple in the lights.  😀 It’s like mood hair!

The most surprising thing to me has been the reaction.  I’d thought my family would berate me for it but the reaction was overwhelmingly positive.  My kids love it.  Strangers stop me on the street with compliments.  I’ve had senior citizens pull me aside to tell me they love it and little children tug my arm to ask if I was a princess.  And me?  I feel like a superhero. 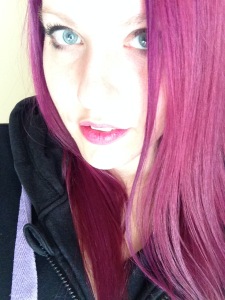