It’s almost June, and that means a few things; the kids will be in summer camp, I can sleep in on Sundays because swimming lessons pause over the summer, and oh yeah- I have to start working on my cosplay for September’s Montreal ComicCon!

This year it’s in JULY??

Three years ago I went to my first con.  I went on the Saturday with Jakob, and was blown away.  I guess I hadn’t expected to get the CON experience I’d heard about/seen online, and it was, it truly was.  Jakob was dressed up as a SuperTiger (tiger costume with a superhero cape, his idea) and had a BLAST.

He’s not normally shy but he was beyond extroverted, walking right up to people in costume and asking for pics with them, and posing for the many, many pics people asked to take of him.  I think he felt like a mini celebrity- making a “growl” face and batting at people in the crowd with his tail.

(Plus the girls loved him.)

We had SO much fun, in fact, that we went back again on the Sunday, and brought Yannick and Henri.  And this time I had to dress up too.  I borrowed my sister’s Little Red Riding Hood costume (hey, she’s in a ton of media, comics and video games… Uh, Red, not my sister) and though it was a pain navigating the double stroller around, we had a really great time.  (Maybe a bit less for Yannick, who had to keep smiling as he took pics of me with all the people who came up and asked).  Heh. 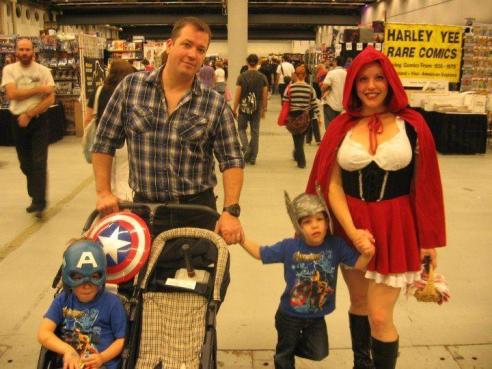 In 2013 I went back again, this time just me and Yannick, no kids.  I did my first ever homemade cosplay, but I still have yet to post pics of it here so instead here’s a quick hint at who I played:

Last year I didn’t go, mostly because life was a bit too hectic, and also because I hadn’t had a chance to make the one cosplay that’s been burning a hole in my brain since I got the idea.

I still haven’t had the time, but I did have another idea, one that I’d first had about two years ago when my kids began playing Skylanders.  I muddled it around last night and think I’ve settled.

I’ve loved the character since my boys (and I) first started playing the game.  First of all, she’s a girl.  And her element is Tech.  And she’s tough.  And wields a big ass wrench and rides a freaking cannon!

Resourceful, Sprocket isn’t one to sit back and let others do the work. She jumps in with both armoured feet, creating solutions for every problem imaginable.[1]

Sprocket was raised with all the privileges of a rich, proper Golding. But she cared little for fancy things. Instead, she spent most of her time growing up in her uncle’s workshop, learning how to build and fix his many mechanical inventions. But everything changed on the day her uncle mysteriously vanished. When she eventually discovered that Kaos had been behind his disappearance, she constructed a battle suit and went after him, leaving the luxury and comfort of her family’s wealth behind. From that moment on, Sprocket was dedicated to fighting the forces of evil, whilst never losing hope that she would reunite with her beloved uncle.

What officially sold me on the idea, however, was when I hit upon how I plan to make the wrench.  The best part is that not only will it be lightweight, but if it works the way I think it will, it will have an enclosed compartment to hold my phone and wallet and stuff.

I’m not planning on sticking exactly to the costume as shown, though.  I found a Deviant Art drawing someone did of Sprocket, and have asked permission to cosplay as that version instead.  It’s simpler, more realistic, but still identifiable.

The really best part?  One of this year’s con guests is Jewel Staite!!!  I will be going to ComicCon dressed up as a female mechanic and (hopefully) get to meet one of THE most awesome female mechanics – Firefly’s Kaylee!  *kermit arm flail*