My arms are in great shape after a week of winding.

I turned Veronik‘s 2 cones of St. Denis Nordique, last seen looking like this: 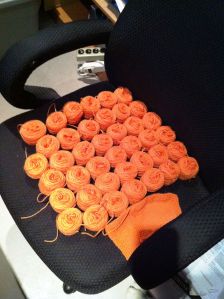 That’s 2 swatches, and 40 mini cakes, ready for our November MKG meeting.  I copied the gauge for a sample pattern using this yarn (Agathe, from the Spring/Summer 2010 issue of the St. Denis magazine), and knit 2 swatches using the required yarn and needles (with a moss stitch border). Our guild project will be to have everyone knit up the same swatches, and then to compare and see what a (presumably) vast array of actual swatch sizes we end up with, as a means to illustrating the importance of swatching.  You know, that just because you use the yarn and needles called for in the pattern, doesn’t mean you’ll end up with anything near the pattern’s gauge.

Each guild member who attends will get a little cake of yarn and a copy of instructions that I printed earlier.  It took me roughly 100 feet of yarn for my swatches, so I wound each cake to 120 feet to account for looser tensions eating more yarn.  (My yarn meter works in feet, and I’m too lazy to do the math right now.  Divide by 3 for yards).

My swatches will be used as examples by Veronik, who is bringing along her trusty steamer to show what a difference blocking makes.  One swatch will be steamed and become the “after”, while the other will remain as-is, as the “before”, and silently simmer and fume.

I also wound up the yarn that Maaike wound for me so I can finish my Linden.  I set up her ginormous wooden cake winder (because it winds ginormous cakes, not that it takes up a large desk footprint) and wound up (heh) with 2 BABs.

Yes, Maaike and I often speak in Three Letter Acronyms.  These babies?  They’re some Big A$$ Balls.

2 thoughts on “that yarn from the other day”